Today, we’re happy to announce Fleep emoji reactions! Read on, if you’d like to find out more about why and how to react to messages…

Reactions are a simple and handy way to respond to something, without actually posting a message. Want to show your support for something? Give it a thumbs-up. Want to share your excitement for something? There you go, throw some confetti at it. Or blow up some emoji-fireworks. Or even show some love with a heart emoji reaction.

And this why reactions are so powerful – as they replace the messages that otherwise would have been posted to respond in those ways, they can actually significantly reduce the noise levels of any Fleep conversation. Every reaction could have been a new message, waiting to be consumed.

In fact, if we see a dip in the total numbers of messages sent in Fleep, and a rise in the use of Reactions, we will know that this feature release was a success.

How to: Fleep emoji reactions

To add an emoji reaction, click on the reactions button right next to the message actions menu entrypoint. This will launch the emoji picker, so you can choose the emoji you wish to react with. 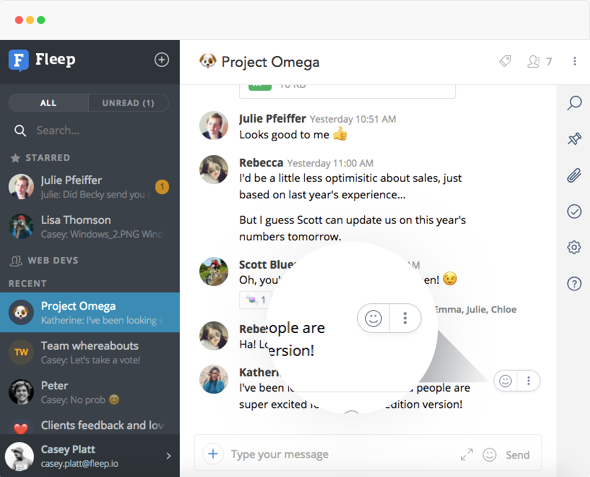 All reactions are shown below the message in the message flow. The reactions you have added will be highlighted in blue. You can also see the count of how many people have reacted with each emoji – and if you hover over any of them, you will see a small popup that shows names of who have added it. 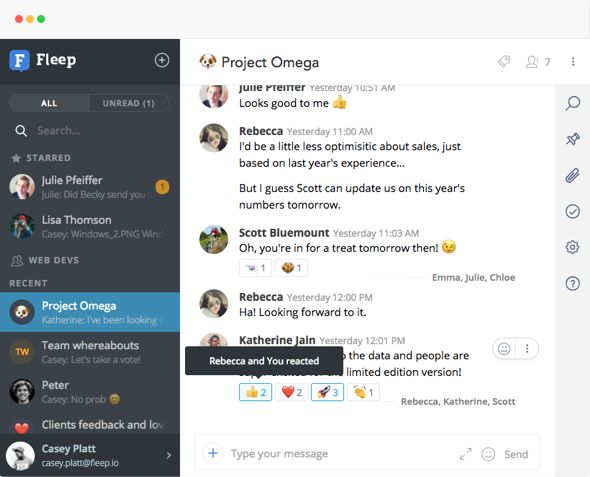 When others add emoji reactions to a message, you can click that emoji to add the same one – and you can always click on a reaction you’ve added to remove it.

We also thought about our users who love keyboard shortcuts and commands. So, if you type and send “+1″, this will add a thumbs-up reaction to the latest message in the message flow. Even more, you can add any emoji reaction by sending “+1 emoji” or “+1 :emojicode:”. See it in action below:

Voting and polling in Fleep with reactions

Reactions can also easily be used to create a simple and quick vote or poll in Fleep. To do so, share the options in a message and ask people to mark their preferred option with emoji reactions. This is super handy for making decisions in a democratic way. 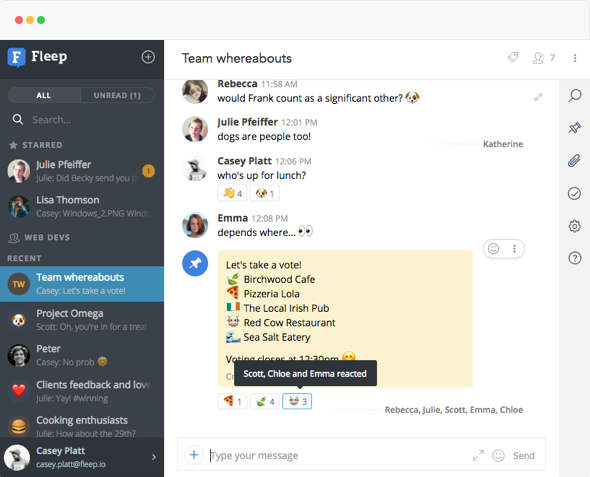 Creating a vote as a pinned message will highlight it in the message flow and also allow others to add options!

Fleep emoji reactions are available across platforms and can be added to regular Fleep messages, as well as tasks and pinned messages. Do note that you cannot add reactions to system messages.

We hope you enjoy using Fleep emoji reactions! All feedback and requests are welcome via support@fleep.io. Let’s also stay in touch through our social media channels. We’re on Twitter, Facebook and LinkedIn.